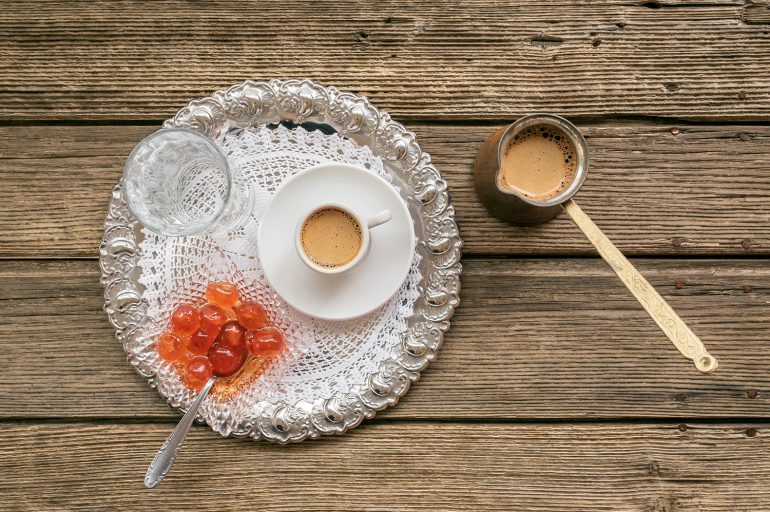 The jet-black treacle-like coffee served at every kafenion in Greece has been part of Greek culture for centuries, but until the 1960s ‘Greek coffee’ as it’s known today, didn’t exist. That’s because before then it was called ‘Turkish coffee’, from the time when most of Greece was controlled by the Ottoman empire.

Every country in the eastern Mediterranean has a similar unfiltered coffee to Greek coffee, and all are likely to have originated from Turkey where it was first introduced in the 16th century.

Greek coffee is made with a very fine grind of coffee beans – usually arabica blend – and is sometimes called a Turkish grind. It’s boiled in a small long-handled pot known as a briki and served with the grinds still in the cup. A drinker of Greek coffee allows the grinds to settle before slowly sipping the piping-hot brew.

The making of Greek coffee, like the Italian espresso, involves a foam being produced (known as crema in Italy). In Greece it’s called the kaimaki (pronounced kaee-mah-kee). The richer the foam, the better the coffee.

Making a Greek coffee requires the briki to be set over a low heat, and much stirring is needed to ensure the best kaimaki. A variation on the usual Greek coffee is called glykys vrastos – an intensely sweet brew, which is boiled more than once.

As for every type of coffee served in Greece, there are two words to describe how sweet you want it: Metrios (pronounced meht-ree-ohss) is semi-sweet – with one serving of sugar. Glykos (pronounced ghlee-kos) has two servings of sugar. Ask for Sketos and you’re asking for no sugar.

Greek coffee is typically served with a glass of cold water. Delicious Greek pastries like baklava and kataifi make the perfect accompaniment.

Food of Crete: Traditional Greek Dishes You Must Eat When You Visit Crete 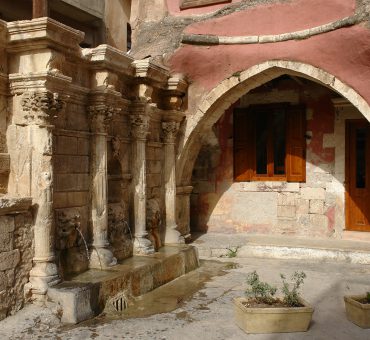