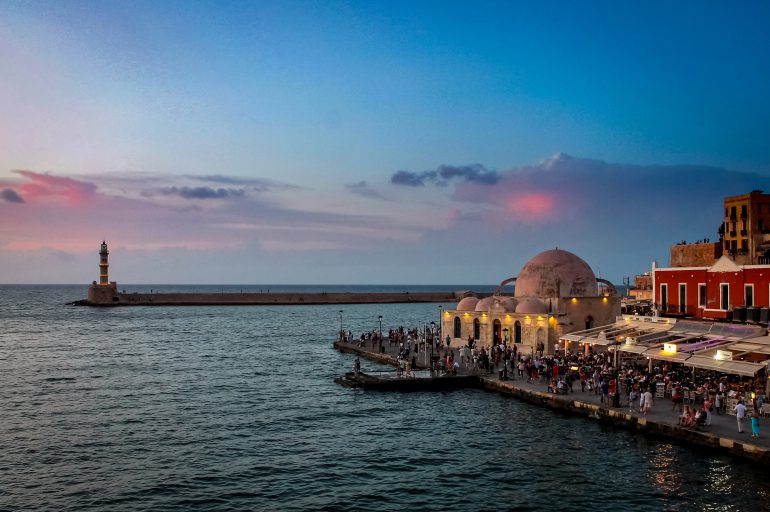 With its Venetian harbour and the beautiful ancient alleyways that surround it, a visit to Chania and its gorgeous old town is one of the highlights of any visit to Crete.

One of the oldest continuously inhabited cities in the world, Chania was invaded over millennia by Romans, Byzantines, Venetians, Turks, and the Germans in WWII, and all of them have left their mark. The richness of Chania comes to the surface when you become a kind of amateur archaeologist, digging so to speak, as you stroll, to reveal its fascinating history.

Today many of the ancient houses of the old town’s houses have been transformed into cosy restaurants, cafes and boutique hotels, set like jewels in the meandering lanes. Strolling through this picturesque town you’re on a journey through Crete’s turbulent history.

At the old town’s north-west tip, Firkas Fortress on the waterfront is home to the Maritime Museum of Crete, well worth a look for its collection illustrating the history of seafaring in Crete and its unique WWII Battle of Crete exhibits.

The fortress itself was built just before the fall of the city to the Turkish in 1645 and the site has particular significance: on 1 December 1913, the Greek flag was raised here for the first time, marking Crete’s unification with Greece.

The Firkas fort makes an ideal start to a walk around Chania’s most famous attraction, the Venetian Port – one of the great seafront walks of the Mediterranean. Pass by the domed Yali Tzami mosque, and the port’s eastern basin which features the Megalo Arsenali, built by the Venetians in the 16th century to construct and repair their warships. Today the building houses the Centre for Mediterranean Architecture. Passing seven more arsenali, head out along the breakwater mole to the Chania’s iconic lighthouse. Built around 1600, its minaret-style design derives from its rebuilding by Crete’s Egyptian rulers in the 1830s.

On this eastern side you’re close to the Splantzia district – a great spot to escape the crowds. A Turkish neighbourhood in Ottoman times, Splantzia in recent years has blossomed into one of Chania’s most fashionable areas. Take a coffee in the square beside the church of Agios Nicholas which was once the city’s central mosque. Today it is the only temple in Greece that has both a belfry and a minaret.

While the delights of the old town will always be Chania’s most popular attributes, the city’s bustling modern centre has its own unique and sophisticated charm, with excellent shops, cafes and restaurants.

The Municipal Market built in 1913 is a vibrant slice of modern Chania. Constructed as the city’s main vegetable, fish, and meat market, today it operates in much the same way as a century ago, supplying Chaniots with the staples of the traditional Cretan diet.

Strata (54 Portou) is a gem, tucked away at the end of the narrow alleyway not far from Chalidon str. Great traditional Cretan dishes at good prices.

Chrisostomos (Defkalionos & Ikarou)
This award-winning taverna hides its treasures just behind the harbour at its eastern end. Popular dishes include lamb tsigariasto – a traditional dish from the south of Crete, goat with mizithra cheese, and sfakiani pita.

Ginger (Sarpaki 36)
Elegant and sophisticated, Ginger is set in a tiny square and offers classy meze-style dishes with Greco-Italian influences. A tranquil place for a perfect lunch or dinner.

If you’re heading into Chania by car, parking can be a problem. To park on the west side of the city centre (a short walk to the old town), you’ll find a free car park 100 metres on the left on Akti Kanari street – the coast road left off Pireos street. Convenient pay parking is Plaza Parking next to Sklavenitis supermarket on Pireos str. 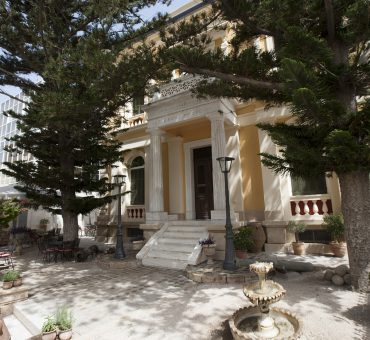 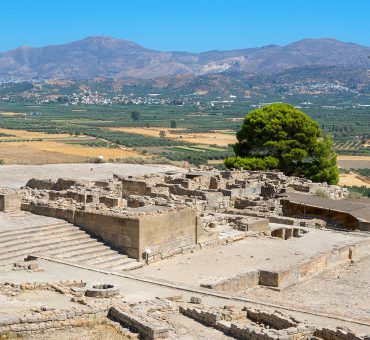