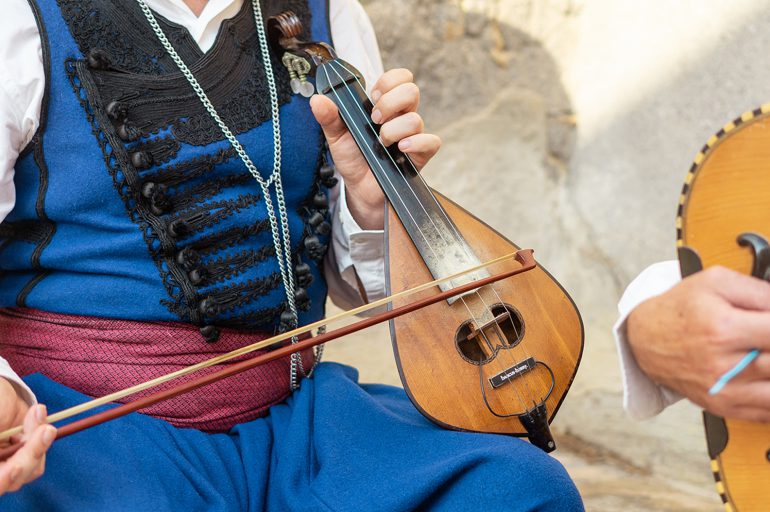 Central to the traditional music of Crete is the pear-shaped, three stringed lyra, which is played on the knee with a violin-like bow. For centuries the lyra’s characteristic melodic tones have been the soundtrack to Cretan culture. A good way to spot a lyra player is to see if they have long fingernails on their left hand. That’s because the lyra’s notes are, unlike the violin, created not by pressing the strings down against the neck, but by the musician pushing the strings horizontally with their nails. With no frets or markers to guide the musician, it’s a fine art, needing enormous skill.

Apart from the standard lyra, there are two other varieties: the smaller lyraki, with its higher pitch, and the larger, 4-stringed vrodolyra, with its deeper bass tones.The sound of the lyra, whether drifting out from a small kafenion, a village celebration, or at a large concert, is unmistakable – often joyous with fast-paced melodies that accompany traditional dancing, and sometimes a quite different and poignant haunting sound, played with slow drawn-out notes that touch the soul.

According to Greek mythology, the lyra was first created by the god Hermes, the son of Zeus, who used the shell of a turtle and the skin and the gut of a cow (for strings) stolen from Apollo to make the instrument. He then offered it to Apollo as repentance for the animals he had stolen. The earliest known visual references to the lyra are from illustrations of lyraki in Byzantine art, dating from 10th century Constantinople and it is believed the instrument was brought to Crete around this time.

Today, handful of expert craftsmen who make the finest lyra in Crete, use aged woods – mulberry, maple and walnut for the sound box, and lebanon cedar (from reclaimed wood over 200 years old, brought to Crete in Ottoman times) for its top surface – the sound board. The lyra is often the accompanying instrument, along with the Cretan laouto (lute) when mantinades are sung, short rhyming verses that tell a story, Widespread across Crete, the mantinada is the island’s most common form of folk song.

Heraklion has a long and proud tradition of lyra makers and musicians, none more so than the internationally celebrated lyra specialist Ross Daly. Of Irish descent, Ross made Crete his home nearly 40 years ago when he established his Labyrinth Musical Workshop – an educational institution that promotes traditional folk music traditions from around the world in the village of Houdetsi, 20km south of Heraklion.Having produced more than 35 albums, Ross Daly is a living legend. He travels widely in Europe and beyond playing sold-out concerts wherever he goes, and if you get a chance to see him play, grab it; the experience is unforgettable.

Listen to the haunting lyra music of Ross Daly: 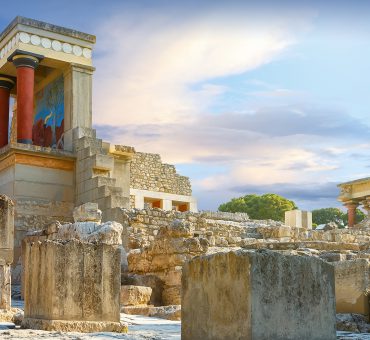